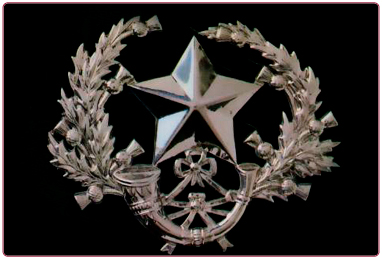 The Cameronians (Scottish Rifles) Regiment opened its first museum in 1931, but it has collected objects of significance since its formation in 1689.

The collection charts the regiment's history spanning almost 300 years of service across the globe. It contains objects from its Covenanting origins, to the disbandment of the 1st Battalion in 1968, and beyond.

South Lanarkshire Leisure and Culture Museum Service care for and manage the collections. The collections continue to grow and develop, depicting life and service in the regiment.

Behind the scenes, continuing cataloguing and digitisation work helps improve our understanding of the objects in the collection, and their significance to local, Scottish and world history.

The Cameronian collection spans a wide variety of objects from all over the world.

Here is a very small selection of the types of objects in the Cameronians collection:

We hold a number of important banners dating back to the religious struggles of the Covenanters. Among these is the 'Bluidy Banner' which was carried by Covenanting forces at the Battle of Bothwell Bridge in 1679, the banner carried by a piper of the 2nd Battalion at the Battle of Neuve Chapelle on March 10th 1915 and the very first set of Colours presented to the 90th Light Infantry Volunteers in 1794. The Colours are currently on display at Low Parks Museum.

Over 1,000 medals and awards belonging to officers and men from The Cameronians (Scottish Rifles) are on display in Low Parks Museum. Among them are seven Victoria Cross medals, Britain's highest award for bravery.

We have a fine collection of swords dating from the 1600s to the late 1900s. Among them are examples from battles of the Covenanting era, as well as presentation swords belonging to General Lord Hill and Field Marshal Lord Wolseley, two of the regiment's most famous officers. We also have a fine collection of regimental uniform and headdress dating from the 1860s onwards.

A large collection including official regimental group photographs, personal snapshots, studio portraits, foreign travel and publicity images. Sadly, a large number of the photographs in the collection are unnamed.

These include a number of albums containing sketches and paintings by Henry Hope Crealock, a noted writer and painter who was an officer in the 90th Perthshire Light Infantry (later to become The Cameronians (Scottish Rifles)) in the late 1800s. A beautiful set of watercolours shows the 6th Battalion during training and subsequent actions in Holland during the Second World War.

We are very fortunate to have personal diaries belonging to Field Marshal Wolseley, Britain's most famous Victorian general, and a former officer of the 90th Perthshire Light Infantry (later to become The Cameronians (Scottish Rifles)). We also hold a number of diaries and accounts from officers and men who served with the regiment in various different conflicts and campaigns.