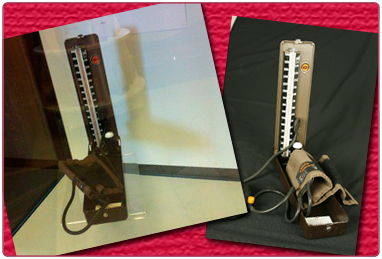 A collection of medical equipment was donated to the museum in March of 2002, following the closure of St Mary's Hospital, Lanark.

The selection of instruments makes a fascinating collection, representing hundreds, perhaps even thousands, of procedures undertaken at the hospital.

This example is an instrument called a Sphygmomanometer which, until recently, was in common use to measure blood pressure. Contained within the long metal box, affixed to upper lid, is a mercury gauge with rubber tubing attached. In the base tubing is attached to a brown fabric ‘velcro’ cuff which, at the end of the tubing, has a small rubber bulb pump with orange outlet valve for manual inflation/deflation.

The building is now situated in Glebe Drive. It was built to the north-west of St Mary’s R.C. church.

It became an auxiliary hospital during the First World War, and hutted hospital annexes were added during the Second World War as part of the Emergency Medical Scheme. By the 1960s it had become a convalescent home and geriatric unit. The west wing was badly damaged by a fire in 1969. By the 1980s it had been acquired as local council offices.