English Concertina – made by Lachenal c 1925 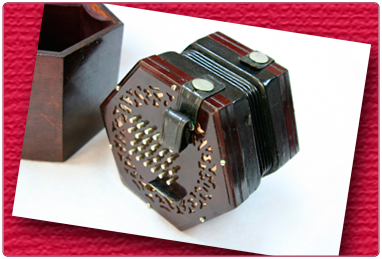 The English concertina was highly fashionable, particularly in the urban areas of Scotland, during the first half of the 20th  century.  Around the time of the First World War and through the 1920s the popularity of the concertina was such that thousands were manufactured and its portability made it easily carried around on public transport to all sorts of social gatherings. The most famous name in concertina manufacturing was Wheatstone and their slogan was “Play an instrument you can carry”.

Louis Lachenal, who had been employed by the Wheatstone company, left to set up his own business (possibly taking some of Wheatstone's tools, and even some employees) around 1848-1850. He is thought to have started up manufacture around 1850. With his Swiss toolmaking background, he was able to machine up to out-produce Wheatstones. For example, whereas each of the Wheatstone fulcrums for the button levers was painstakingly hammered in by hand, Lachenal devised a machine to push an entire set into the action board in one press. It is thought that concertinas numbered up to about 20000 are labelled Louis Lachenal, but after that they are labelled Lachenal and Co.

Round about 1912-14, the First World War days, young people would march the streets playing the concertina. The instrument was as popular as the guitar is now. After the war production and demand accelerated. 1920-35 was supposedly the peak for manufacture. The little boxes were very evident in the streets of Glasgow.

A new English concertina was an expensive purchase for most when, in 1934, 71% of the working population in Glasgow had an annual income of less than £208 a year. The price of a standard 48 key wooden ended instrument by Lachenal was around £9.