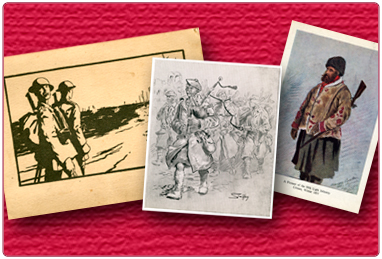 Sending Christmas greetings to family, friends and colleagues, is as important now as it was when Sir Henry Cole commissioned the first Christmas card in 1843.

Organisations still use specially designed cards to send their Christmas greetings to this day.

This selection of cards, from The Cameronian (Scottish Rifles) archives, use images of importance to the regimental history.

1. This card was sent by Pte J Pullen of the 10th battalion in 1917. The smiling soldier image was later used in volume two of The Regimental History of the Cameronians (SR)

2. The artist Charles Johnson Payne (Snaffles) was a well known war illustrator who allowed this image 'Bonnie Blue Bonnets' to be used as the frontispiece in the second volume of The Regimental History of the Cameronians (SR).

3. This card was sent by Major General DAH Graham CB, CBE, DSO, MC during his time as Colonel of the Regiment. It uses a painting by Capt Henry Hope Crealock (later Lieutenant General) from his album, painted during the Crimean War