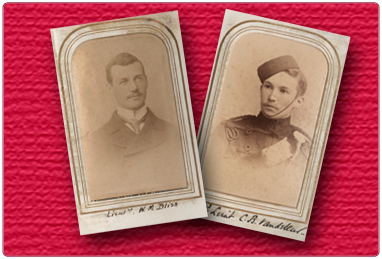 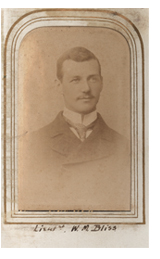 The Photograph Album is opened to show portraits of Lieutenant C B Vandeleur and Lieutenant W M Bliss.

This photograph Album was presented to the 2nd Battalion The Cameronians (Scottish Rifles) at army barracks in Dublin in the late 1800's. It features miniature photographic portraits of officers of the 2nd Battalion, as well as some photographs of the Royal Family, and of objects relating to the Regiment.

Vandeleur was a prisoner of war in the First World War, but escaped, and went on to have a long and distinguished military career. He founded The Cameronians Regimental Association, and was heavily involved in regimental life up until his death in 1947.

Bliss was commanding the 2nd Battalion at the Battle of Neuve Chapelle, when he was killed. Bliss and Vandeleur were close friends, and the diary of Lieutenant Colonel Bliss was presented to the Regiment by Vandeleur. This diary can be seen in the newly re-opened Cameronians display.