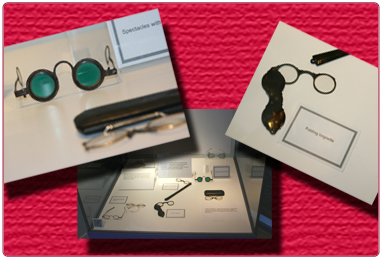 Spectacles or eyeglasses are thought to have been around since the 1200s. It is not known who invented spectacles, but manuscripts written in the 1200s refer to glasses being used to help aid vision.

Early spectacles were held to the eyes or balanced on the nose. ‘Legs’ did not appear on frames until the 1700s.

The spectacles on display at Low Parks Museum this month are from the 1800s and 1900s. They include lorgnette spectacles, pince-nez spectacles and glasses with tinted lenses.

Lorgnettes first made an appearance in the late 1700s. They had a handle to hold them to the face and became a fashionable accessory, particularly with ladies. For this reason, they were often very decorative.

Pince-nez spectacles were popular in the late 1800s and were similar to the earliest forms of spectacles because they did not have legs. Instead, they were clipped to the bridge of the nose.