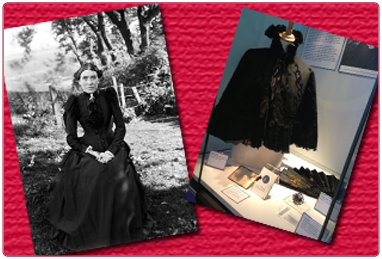 These objects are examples of mourning items which would be worn following the death of a close relative.

In Victorian times the wearing of mourning clothes was seen as a way of expressing feelings of sadness and grief. Both the period of mourning and the wearing of mourning clothes were closely dictated by elaborate etiquette at the time, the closer a relative was the longer you were expected to be in mourning. If it was a spouse then the widow was expected to be in deep mourning for two years, wearing only black for the first year then gradually replacing it with other dark colours then after two years muted colours such as grey would be introduced. However some widows remained in mourning for the rest of their lives and only wore black, Queen Victoria is a famous example of this, remaining in mourning for forty years following the death of Albert.

Mourning wear even extended to accessories such as umbrellas, jewellery and fans like the one displayed here. People in mourning were also expected to restrain from taking part in any social activities during the period of mourning.

Nowadays people tend to wear black clothing or a black suit and tie for the day of a funeral only; however even this is declining with many people opting to wear bright colours in a celebration of the deceased’s life.