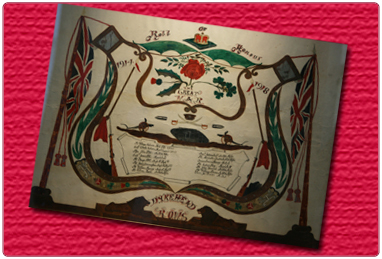 This roll of honour commemorates the men of Dykehead Rows who served in the First World War. Dykehead Rows were cottages owned by the Summerlee Iron Company and housed miners who worked at the Dykehead Colliery, near Larkhall.

The roll of honour has been drawn and painted by hand. It lists the names of 15 men of Dykehead Rows who served in the army during the First World War, two of whom were killed. There are several shared surnames on the roll, and it is likely that some of these men will be brothers or cousins.

The roll of honour belonged to the Potter family, of which John, James and George are listed. George was a talented artist and it is believed it was he who made the roll of honour. There are two sketches on the reverse, and these are also believed to be the work of George Potter.

Also on display is a chanter used by John Potter, a piper with the 6th Battalion The Cameronians (Scottish Rifles) in the First World War.

These items were kindly bequeathed by May Potter, London Street, Larkhall.