A Risky Business: Life as a Miner 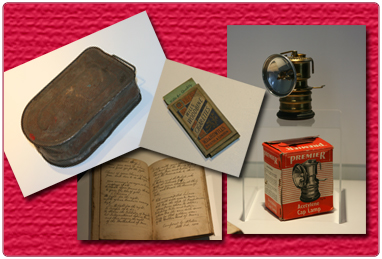 A risky business: life as a miner

Lanarkshire has a centuries-old association with coal mining. Tough and dangerous, the belongings and outlook of miners often reflected this.

Miners worked between 8 and 10 hours, swinging a pickaxe whilst doubled over in a cramped space. Pneumatic drills became more common in the 1920s and 30s but prolonged use could often lead to long-term nerve or muscle damage. Above ground, many shops and houses were owned by their employer, who dominated pit communities. Eviction was often used to intimidate miners who wanted better pay or conditions. This situation was fought against by the increased organisation of miners into unions. Improvements like pit-head baths and safety equipment were provided as a result of concessions won from the mine-owners. The notebook here belonged to Andrew Paton of Larkhall, a union representative in the late 1800s. Alongside lists of union members and pages of shorthand practice are also poems and songs composed by Paton, covering a diverse range of subjects from the philosophical (“On Man”) to romance (“Jeannie Broon”) and family (“Tae Mither”).

Piece-boxes were made of tin to protect a miner’s lunch from the rodents in a pit and could be hooked onto a belt. A cheese and jam sandwich is still known as a “miner’s piece” due to its popularity among colliers. Woodbine cigarettes, renowned for their strength, were regarded as a miner’s favourite – although smoking underground was forbidden.

Acetylene or carbide cap lamps are an example of the kind of safety equipment that was introduced in the industry. Invented in the 1890s, they were attached to a safety helmet and contained enough fuel for about four hours’ use.