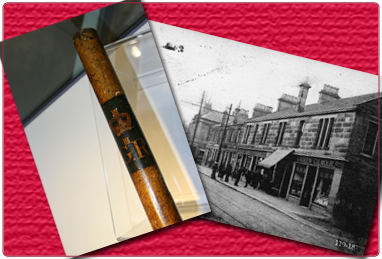 This baton is believed to have been used by John Gray who was a grocer in Stonefield, Blantyre to defend himself and his shop during a riot in Blantyre in February 1887.

The riot broke out as the result of a meeting held by miners in Hamilton where they discussed striking over their poor working conditions. As they headed home through Blantyre riled up by their impassioned discussions they decided to riot.

Upon meeting a baker’s van in Stonefield they attacked it and emptied the van of its bread. The mob then began to congregate outside a licensed grocer’s shop where they tore down the shutters and preceded to loot the shop, emptying it of all the stock including barrels of whisky which they rolled away and broke up, dividing the contents amongst themselves. As the rioters moved onto more shops the police of the town were overwhelmed but were soon reinforced by mounted police including Sheriff Birnie who read the men the official Riot Act.

As the rioting continued and the mounted police came under attack the local shopkeepers decided to keep their shops closed. Eventually a troop of soldiers from the 4th Hussars was dispatched to quell the riot. Fifty three men were arrested in total, many of whom were drunk from the items they had looted.