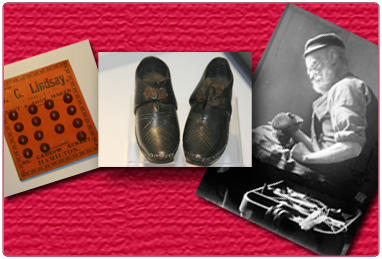 Shoemaking was an important trade in the South Lanarkshire area in the 1700s and 1800s. Shoes and boots were handmade by craftsmen who were mostly self-employed.

The craft particularly flourished in Lanark, Strathaven, Hamilton and East Kilbride. Records from 1811 show 50 shoemakers working in Strathaven when the population was only around 2,000 people. In 1841, 96 shoemakers were recorded working in Lanark.

By the early 1900s, large quantities of footwear were produced in factories in Glasgow and Ayrshire resulting in the decline of shoemaking in this area. Traditional shoemakers could not compete with this mass production.

The collection includes a tiny shoe, made as an apprentice piece in 1840, an early pair of children’s boots, thought to date from the late 1600s, and a boot made by John Riddell of Strathaven in the late 1800s.