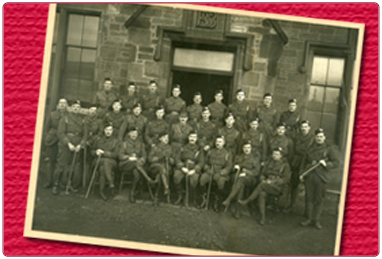 Monday 4th August 2014 marked the 100th anniversary of Great Britain’s entry into the First World War. This photograph shows the officers of the 8th Battalion The Cameronians (Scottish Rifles), taken in late 1914. The 8th was a Territorial Force battalion of part-time soldiers, most of who lived and worked in and around Glasgow.

Although not originally intended for overseas service, many battalions of the Territorial Force took part in the battles of the First World War. The 5th, 6th, 7th and 8th Battalions of The Cameronians (Scottish Rifles) all served overseas.

Of the 29 officers shown in this photograph, 17 died during the War. Eleven of the officers who died were killed in the same battle, at Gully Ravine, Gallipoli, on 28th June 1915.

The names of 7,106 soldiers of The Cameronians (Scottish Rifles) who died in the First World War are commemorated on the Regimental Roll of Honour. This photograph shows the faces behind some of those names.