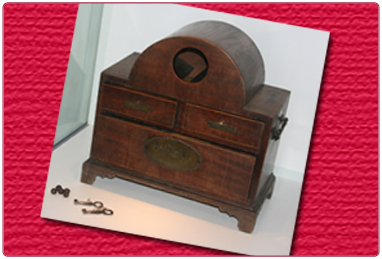 Hamilton Liberal Society was founded in 1801. It was a friendly society not a political organisation: Before national sick pay and old age pension schemes, many working people formed their own groups to supply cover for illness and old age. These groups were called friendly societies.

Friendly societies in Scotland date back to the 1760s. The Hamilton society took the name ‘liberal’ because it catered for people from a wide range of jobs “who may be visited by disease as to prevent them attending on their lawful employment”. Excluded was illness caused by “the immediate effect of dissipation or debauch”.

Voting was done by putting your hand in the hole at the top taking a ball from either the drawer marked Admit or Reject. The ball was dropped into the large drawer at the bottom of the box. Two officials each with a key unlocked the big drawer and counted the votes. A black ball was for reject giving the saying ”blackballed”.

In 1866 the society was wound up and its building at Castle Street (address unknown) sold.