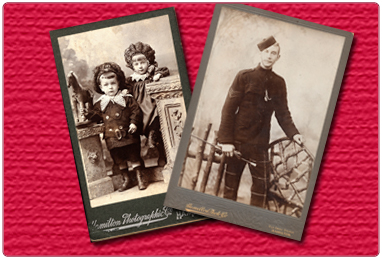 Today we can share photographs of ourselves easily, online or by email. In the early days of photography, however, photographs were one-offs and could not be easily reproduced.

In the mid-1800s, small cartes-de-visite like the ones on display, were developed, allowing people to obtain multiple prints of the same photograph which they could then share with family and friends. The popularity of these small photo prints grew, after carte-de-visite portraits of Queen Victoria and the Royal Family were published in 1861. A later development was a larger format print, known as the cabinet card. They are probably so-called, due to their suitability for display on a sideboard or cabinet and were most popular in the 1870s and 1880s. The studio or photographer’s details are often printed on the front of these cards.

The popularity of the cabinet card declined in the early 1900s, partly due to the introduction of the real photo postcard.

The photographs on display include cabinet cards and cartes-de-visite produced by local photographic studios and portraits of soldiers of The Cameronians (Scottish Rifles) regiment.