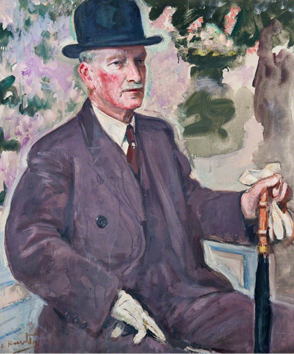 This painting is a portrait of a William Stewart (of whom we know little) by the Scottish Colourist, George Leslie Hunter. This work was included in our exhibition "Visions for the Mind" and is a painting that stood out in many ways.

A word or two about the artist himself. His grandfather, James worked first in East Kilbride and then had a smallholding in Carluke. Sadly, Hunter’s elder siblings Catherine and James died young in Rothesay and his father moved the family to the United States. Although trained in pharmacy, William Hunter set up business as a grocer but eventually returned to Scotland and ran a bakery in Pitlochry, before his death. George Leslie, called Leslie by family and friends, stayed in America, becoming one of a colony of artists in San Francisco, visiting Paris with some of them in 1903.

Hunter returned to Scotland in 1906 and stayed in Paisley but, unable to make a successful living from painting, moved to London where he worked as an illustrator. The well-known Glasgow art dealer, Alexander Reid, became interested in Hunter’s paintings and gave the artist an exhibition.

During WW1 Leslie Hunter worked as a labourer at Milburn Farm in Dalserf, near Larkhall and continued to read all he could on the artists he admired such as Cezanne, Van Gogh and Gauguin. Some of his paintings were still shown in Glasgow and his name was recognised in the art world as the war came to a close.

An important exhibition in London in 1925 included works by Samuel Peploe, J D Fergusson, F.C.B. Cadell and Hunter. These artists together are grouped as the ‘Scottish Colourists’ and were most influential, not only in Britain but also on the Continent.

Hunter continued to travel, returning to the United States and painting in France. He died in Glasgow in December 1931.

George Leslie Hunter’s life straddled the late 19th and early 20th century. This portrait of William Stewart is likely to be a late work as, when the artist eventually returned to Glasgow, he began to paint portraits regularly, indeed, an exhibition of portraits was held in Glasgow the year he died. We don’t know whether our painting was exhibited at that time but it is fair to surmise that Hunter produced it around the time he was especially interested in portraiture.

Looking at our painting, we see how it contrasts so much with Victorian portraits of worthy citizens of that time. It could be argued that it is entirely naïve and lacks technique but, seen in context with the larger art world, its development through French impressionism and the massive influence this whole movement had on Hunter, together with his admiration for artists such as Whistler and McTaggart, his bold statement has a powerful attraction.

Hunter also painted many still lives and wonderful landscapes, stylistically linked with impressionism, but this important portrait somewhat stresses his accent on colour, flat modelling and simplicity as well as any of his other works. It could be that this painting, at first glance plain and simply done, reveals art itself showing the essence of the man rather than just the form and detail of the figure. Hunter gives us a view of William Stewart which perhaps reveals more than the most technical realist work.

I leave it to you to decide.